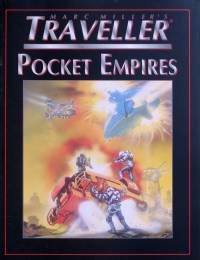 Pocket Empires was a stunning book and probably the best CORE production for IG. The book was written by Andy, myself, Stuart, Jo and Joe, and we also recruited quite a number of play testers. The book set out the rules for creating and running pocket empires in Milieu 0. This was not really a role playing book - it was a far higher level game working at the world and multi-world level. There were rules for planetary economies, planetary development, empire building, war and integrating adventures into the big picture.

My piece was Expanding the Empire. I created the “Unilateral Meta-Task” as a way of letting players take over other worlds with a relatively simple, but rich, game mechanic. Players could launch a variety of offensives to take over another world, from the straightforward military offensive to things like subversion, trade, infowar, trade, religion, politics, aid, blockade, corporate take-overs or technologic domination. There were also rules for diplomacy, alliance building and even dynastic marriage.